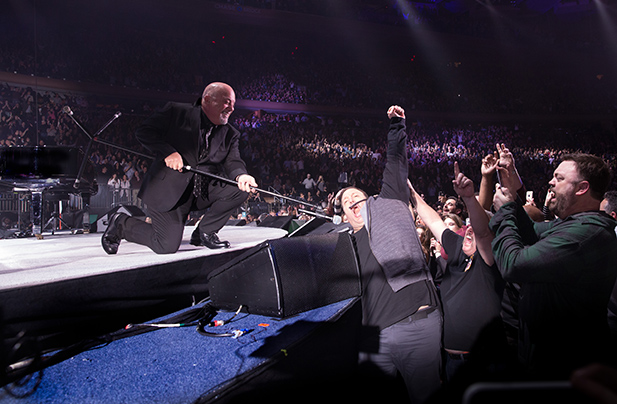 “This is our Halloween show,” Billy Joel said as he kicked off his record-breaking 33rd consecutive concert at Madison Square Garden. It was the Friday before Halloween, the third game of the World Series, and 11 days before the maddening general election, and Billy was back after a brief break, recovered from successful sinus surgery. Billy opened the show with his haunting theme from “The Stranger,” followed by “My Life,” featuring a skull prop on top of his piano for most of the show. He peppered the set list with Halloween-themed songs including “Werewolves of London,” “Monster Mash,” “Witchy Woman” and the “Theme from ‘Jaws.'”

Fellow Long Islander Kevin James organized a few seats in the front row with cast members from his new CBS sitcom, Kevin Can Wait, where they could be seen singing along during the concert. At the end of “It’s Still Rock And Roll To Me,” Billy held his microphone stand out for Kevin to shout the closing verse, captured in the fan videos below. At the end of the concert, Billy tossed the skull prop from his piano to Kevin.