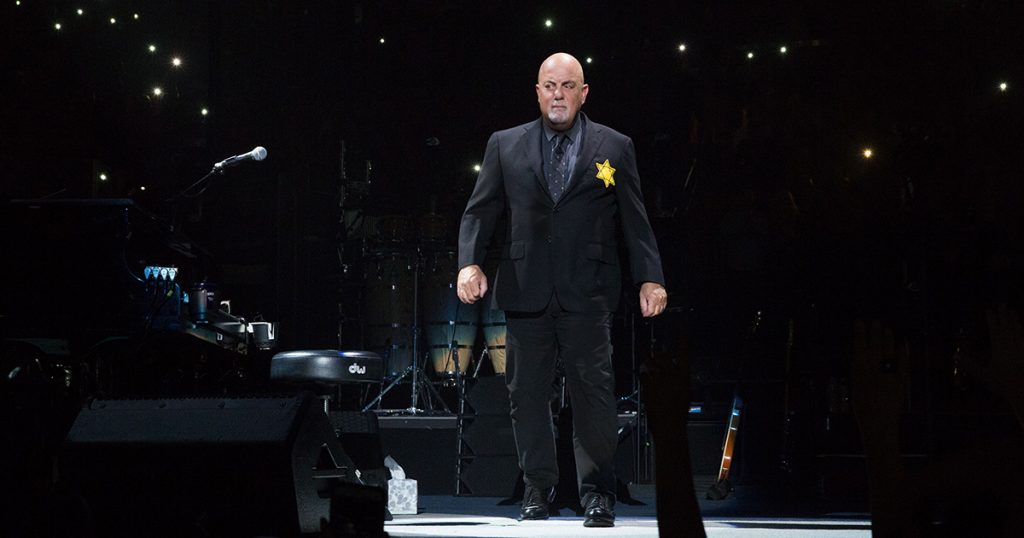 For his four-song encore, Billy Joel wore a bright yellow Star of David on the front and back of his black suit. Cheers went up in the crowd when a close-up of Joel wearing the symbol was shown on the main video screen. He made no comment onstage about why he was wearing the symbol for Jewish identity. On Tuesday, Joel issued a statement quoting Irish statesman Edmund Burke, saying, “The only thing necessary for the triumph of evil is for good men to do nothing.” Through a representative, Joel declined to further comment. … The subject is close to Joel’s heart, considering many of his relatives died in the Holocaust and his paternal grandfather, Karl Joel, had to flee Nazi Germany in 1938, eventually settling in America after living in Switzerland and Cuba. – Newsday

Billy Joel made a strong statement against the growing neo-Nazi and white nationalism movement on August 21, taking the stage at New York’s Madison Square Garden wearing a yellow Star of David. The 68-year-old hitmaker, who was born to Jewish parents and describes himself as culturally Jewish, donned the patch on both the lapel and back of his suit blazer — a reference to the yellow stars Jews were forced to wear during the Holocaust. – PEOPLE

The move comes on the heels of a violent protest in Charlottesville, where one woman was killed by an alleged participant in the neo-Nazi rally … when hordes of white supremacists and neo-Nazis took to the streets, chanting “Jews will not replace us!” … Billy didn’t appear to directly address the patch Monday, but not much needs to be said here to get his point. – TMZ

Singer Patty Smyth dropped in at Billy Joel’s Madison Square Garden concert in New York City Monday night to perform one of her biggest hits, “Goodbye to You” — as an image of former White House chief strategist Steve Bannon flashed on the screen above her. The former Scandal singer belted out her 1984 hit as a montage of former White House staffers, including Bannon, former press secretary Sean Spicer, and former communications director Anthony Scaramucci played on the background screen. – Breitbart

Rabbi Abraham Cooper, associate dean at the Simon Wiesenthal Center told The Jerusalem Post on Tuesday, “Billy Joel’s father was [a soldier in the U.S. Third Army and was present at the liberation of Dachau in 1945]. If anyone has the right to use the Yellow Star as a gesture of solidarity to victims of the Nazis and in defiance of latter-day Nazis in Charlottesville and elsewhere around the world, it would be Billy Joel. Kol hakavod [‘Good going’], Billy!” – The Jerusalem Post

Billy Joel presented a $20,000 scholarship to budding musician Jeremy Kaplan before his August 21 concert at Madison Square Garden. Kaplan, a 2017 alumnus of the Nassau BOCES Long Island High School for the Arts (LIHSA), will start his freshman year at Berklee College of Music in Boston, Mass., this fall. Joel, a strong supporter of the arts in public schools, learned about Kaplan through his ongoing support of LIHSA. Jeremy was one of the many LIHSA students who attended Joel’s 2016 master class for the school during which he shared his wealth of experience in the music industry. Kaplan was also a finalist in a recent Long Island piano competition that focused on Billy Joel’s classical work “Fantasies & Delusions.” 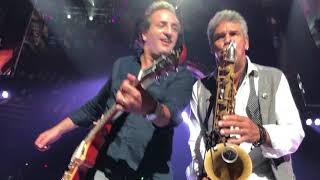 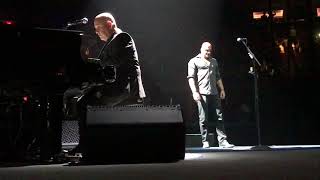 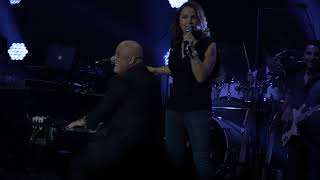