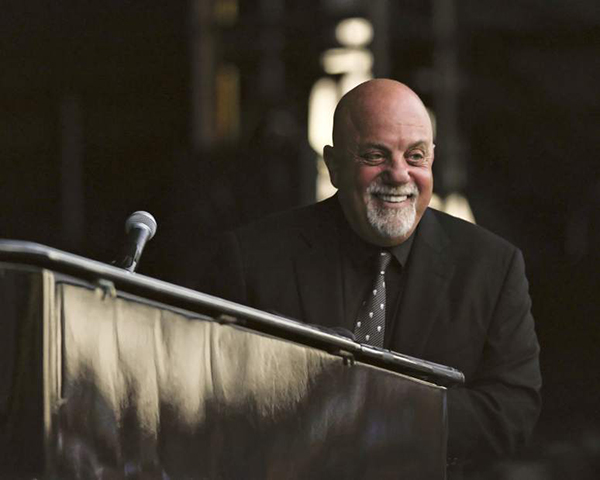 The 39,800 fans at PNC Park were there for a whole lot of Billy Joel, and they got it over the course of a musically rich, two-hour-and-20-minute, hit-filled marathon. … With his fingers caressing (or flying across) the keys and his tight, versatile, veteran band, he delivered a mix of hits, deep cuts like the jazzy “Zanzibar,” “Downeaster ‘Alexa'” and “I Go To Extremes,” and various flights of fancy. … Just past 11 p.m., Kenny Chesney came on stage bowing to Billy with a “We are not worthy,” and the Piano Man put him right into a leading role, singing verses on “You May Be Right.” – Pittsburgh Post-Gazette

Chesney took the stage during Joel’s encore, turning “You May Be Right” — the 26th song of the marathon, 140-minute set — into a driving duet. It wasn’t the first time a country star took a stab at “You May Be Right,” whose roadhouse roots-rock sound has inspired covers from Garth Brooks, Keith Urban and others. This time, Chesney and Joel shared vocal duties, with each singer taking a verse before teaming up for the chorus. As the song wound its way to a close, Joel flipped into his falsetto range for a snippet of Led Zeppelin’s “Rock and Roll,” while Chesney looked on in admiration. – Rolling Stone

The sultry “Zanzibar” was dedicated to the late Muhammad Ali, and then Joel gave the audience a choice: he’d play either “An Innocent Man” or “The Longest Time.” The latter was the rousing choice, thankfully, since it was introduced by a stunning a cappella version of “The Lion Sleeps Tonight” and also gave Pittsburgh’s own Pete Hewlett (who toured with Joel in the mid-1980s) a chance to sing backing vocals. … “New York State Of Mind” — preceded by a snippet of George Gershwin’s “Rhapsody In Blue” was the highlight, views of Manhattan playing on the high-def screens behind the stage. – Pittsburgh Tribune-Review

The Piano Man, himself, Billy Joel was at Pittsburgh’s picturesque PNC Park and dazzled the masses who came out to catch a glimpse of the 67-year old and his talented bandmates. … It wasn’t just Pittsburgh’s stunning skyline and the PNC Park field dimensions that made the concert great. No, it was Joel’s personal connection to our national pastime that made it all come together perfectly. – Weirton Daily Times