It’s not everyday you go from Chuck Berry to Puccini within three songs. But that’s what happened Thursday. Billy Joel slipped “Johnny B. Goode” into “The River of Dreams,” paying tribute to the founder of rock ‘n’ roll, came out of it with “in the middle of the night” (more doo-wop) and then immediately went into “Nessun dorma” from the opera “Turandot,” the soaring tenor vocal provided by guitarist Mike DelGuidice. That, for me, was the passage of the night. – Lincoln Journal Star

It was his first time in Lincoln since 1984, and the city was happy to have him. And with a bevy of memorable songs such as “New York State of Mind,” “Scenes From an Italian Restaurant,” “Allentown” and “We Didn’t Start the Fire,” the crowd hung with him singing every word through the show. Of course, they let it all out when the show neared its close, Joel donned a harmonica and tapped out the first notes to “Piano Man.” The arena filled with voices, and Joel let the fans have the song, eventually stopping himself and his eight-member band as the audience sang the final chorus. It was quite a thing to behold. – Omaha World-Herald 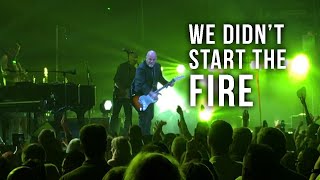