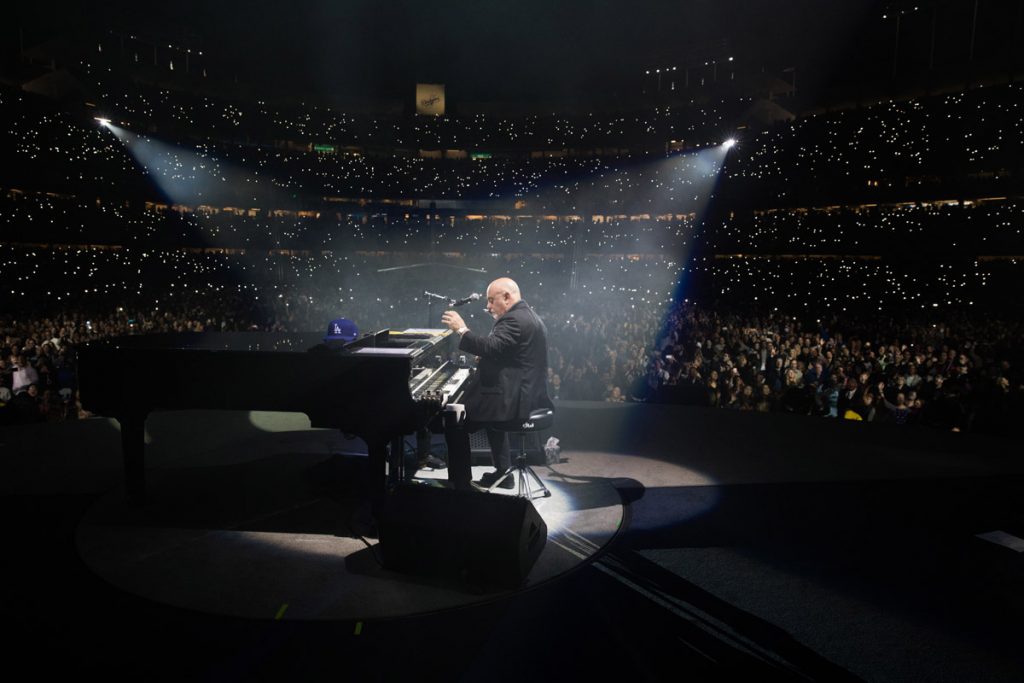 Though this master craftsman of pop is better known as a New York native, Billy Joel spent three formative years living in Los Angeles in the early 1970s, just before he rose to fame. And from the opening moments of his show, he made it clear this baseball park — where he’s never previously performed — was bringing him back to that part of his life. … As many old favorites Joel trotted out, he could have doubled his set list and still not have covered all the songs for which he’ll be most remembered. It’s the kind of realization that can make you wish for another tour from him not too far off in the future. – Variety

Pink emerged first to add her sass and scorch to a duet of “New York State of Mind” and then perform her own soaring anthem “Try,” visibly digging harmonizing with Joel’s mighty, longtime utility player Crystal Taliefero. (Joel scooted out for a portion of “Try,” and Pink said with a grin, “I’m his pee break.”) Later, Joel introduced Axl Rose to the delight of much of the genuinely surprised crowd for a raucous run through AC/DC’s “Highway to Hell.” Rose, who has cited many pop acts as inspiration over the years, proved the depth of his fandom by practically sneaking onstage during the encore to perform an adept, and apt, take on “Big Shot,” with Joel chiming in during the choruses. – Los Angeles Times

“River of Dreams” came with a mid-song interlude of the Eagles’ “Take It Easy” — Joel typically drops in a song from a significant local act — before he wrapped things up with “Scenes From an Italian Restaurant,” a pop song in three movements, and “Piano Man,” which had a deafening chorus of practically everyone in the stadium singing along. – The Orange County Register

Every member of Joel’s pitch-perfect, expert-filled band had a time to shine, whether it was trumpet player Carl Fischer in “Zanzibar” or keyboardist Dave Rosenthal in “The Entertainer”, a song Joel explained was written while living on Mulholland Drive when he was “wrong and cynical” that reminded him “what an asshole I used to be.” Later, he explained the factual inaccuracies of “The Ballad of Billy the Kid,” also written during his time in Los Angeles in response to his desire to “write a movie soundtrack when no one was asking me to write them.” – LA Music Blog

Joel’s choice for a closer, “You May Be Right,” was a bit of a statement. From tickling out lounge standards in that Koreatown bar through a passel of career and personal vicissitudes, Joel has remained the man with no apologies for abandoning pop song composition and converting smoothly to the mountain-top concert draw he remains. … “Now think of all the years you tried to / Find someone to satisfy you” he sang then — and judging by the joyous tumult of the crowd sprawled before him, he had once again delivered as promised. – Billboard