As good as ever, Joel sang with clarity and strength, played the piano with a ferocious energy, and put on an entertaining show from start to finish. … Joel’s voice was strong or tender, depending on the song, but clear and present throughout. It was impressive to hear him let loose on songs like “Miami 2017 (Seen the Lights Go Out On Broadway),” “Pressure” and “Movin’ Out (Anthony’s Song),” a handful of the songs that opened the set. … Joel was more than a performer, making sure the crowd was entertained and that he was engaged. – Tulsa World

And that was just in the first half-hour of the Rock and Roll Hall of Fame inductee’s spectacular 150-minute gig inside a captivated, capacity audience. … Seconds after Joel started singing “Goodnight Saigon,” nearly a dozen military veterans stepped out in front of the drum set and percussion area before being basked in the audience’s rapturous cheers, whistles and hand claps. It was a musical-and-visual display fitting for Veterans Day. – Real Rock News 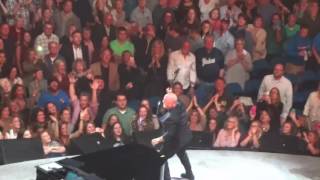 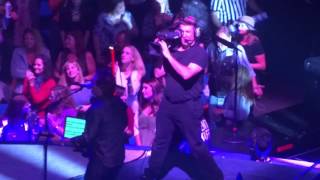